The first mods that are made on a motorcycle are the change of turn indicators. It’s often a painless step and you just need to follow the seller’s instructions. Sometimes, however, the biker is not a motorcycle expert and he can run into problems. This article describes how I designed a small circuit to adapt the flashing signal to a new generation indicator made with LEDs.

There may be better ways to do it but surely this one is fast and fun. If you have any further suggestions, please, write me.

The turn light indicators are one of the most important elements for the motorcycle fairing look. Swapping out the indicator is one of the bikers’ first mods, especially on sports bikes. Generally, aftermarket indicators are sold through a compatibility test but in some cases the biker is not an expert of motorbikes and he could encounter some problems.

In this motorbike, under test the turn lights circuit is a little different from the standard one and the biker found a problem with the indicator swapping. In the oldest motorcycle typically there is a standard relay driven from the control unit. When the button is pressed the relay starts to send the signal that makes the turn indicators flash. More modern vehicles are equipped with LED lights and the control circuit could be different. Furthermore, with the led it is possible to integrate light effects directly into the lights control unit. Generally, LEDs require less power and could be driven with the integrated circuit.

So, if we want to switch to led lights we need some improvements. The standard approach is to buy both the new turn signals and the related relays. It requires access and to substitute the classic relay with the new one. Furthermore, some control unit requires to simulate a fake power consumption in order to feel the indicator presence. Also this problem could be solved with the correct relay.

In this motorcycle, the control relay is not accessible. First of all, even if we manage to change it we will lose the blink of the dashboard’s indicator. Furthermore, if we try to bypass it we will end with the same results. We also need to simulate the presence of the old light indicator. To do that it is possible to use a 6 Ohm resistance to simulate a 21W power consumption. It is possible to find particular thermal resistance made for this purpose equipped with a thermal dissipator of bulk material.

All this description is made because we want to substitute the old analogical light indicator with a modern one. These are made with led and special effects. It is a flowing turn light indicator and the orange line is made up of several LEDs that light up in sequence. Furthermore, there is also a white day running light. The back ones are also equipped with red light as the brake light.

The indicator has three cables, one is the ground and the other two are related to the white light and the flashing orange lights. And here the problems start. The turn indicator wants 12V in DC. This should not be a problem however the blink signal, in the relay output, is like a square wave. This makes the blink effect horrible. The indicator tries to feel the blink signal but it suddenly stops (due to the relay signal) and this leads to the power on of the white lights. Suddenly, another blink impulse came, and this restart the process with a new impulsive orange blink. It is unacceptable.

So, it is clear that the blink signal is more or less a square wave. We cannot change the relay but how can we obtain a DC 12V from this signal? There could be various ways but after a quick search of strange and contrived products, an idea has come, we can rectify the blink signal.

In any basic electronics course, the description of a rectifier is dealt with. It converts alternating current to direct current. Let’s start with a full-wave rectifier. It takes as input an ideal sinusoid that periodically reverses direction, then through the diode bridge or a center-tapped transformer with two diodes, it returns the always positive version of the wave.

It is based on the alternating interdiction of the diode pairs. Then it is possible to add a capacitor to filter the signal, as a low pass, to smooth the full wave and obtain a greater mean DC value. It leads to a reduced ripple. The circuit could be designed to minimize the ripple and obtain an almost direct current really near the peak voltage.

However, we start from a square wave so we can ignore the diode bridge and consider only a half-wave rectifier made by a single diode and the parallel between the resistor and capacitor. Essentially, during the maximum value of the signal we can read the source voltage but during the minimum (that is zero) the diode is interdicted and we can read the capacitor discharge through the resistance.

Then, it is clear that to design the circuit we need to calibrate the time constant in order to obtain the desired ripple. The capacitor discharge as:

Where Vγ represents the voltage drop across the diode and τ is the time constant:

So it is possible to relate the time constant to the desired voltage drop (ΔV) as:

However, this is a problem with infinite solutions because we have to find two components but we can know only their mathematical products. But we can also consider the maximal current:

Another issue is related to the load effect made by the turn indicators that may require calibrating the resistor. Furthermore, we need also to take into account the discreet description of these components. Both resistor and capacitor are sold with finite values. If you need different values you have to compute series and parallel circuits to reach the desired value. Ideally, here we want to use a single resistor and a single capacitor. Let’s try.

First of all we simulate the circuit:

Let’s suppose a square wave with a duty cycle of 50% and a frequency of 1 Hz. It should approximate the indicator signal. With a 47 kΟmh resistor and a capacitor of 47μF, the voltage drop should be less than 2.5V. Both resistor and capacitor are defined with non-definitive values. To compute the time constant we need to know the desired ripple and the square wave period. For the signal period, we can measure it but for the ripple, we need to test the lower voltage that could lead the indicator to light.

Ideally, we want an oscilloscope but this attempt must quickly and economically solve the indicators problem, so I don’t think I should buy an oscilloscope. However, I have several Arduino. I can use the analog input and the serial plotter. Luckily we can use the motorbike 12V source to power Arduino directly from the Vin. So, we can set up the following circuit:

First of all, by using serial communication with a baud rate of 115200 we can transfer 115200 bits per second and every char needs 10 bits. So we can print 11520 char/sec and use 4 char for the measure. It means approximately 2880 measures per second but we have to remember about the Shannon’s theorem and we need at least two times the maximal frequency of interest. So we can measure until 1440 samples/sec, i.e. 1.4 kHz. The square wave under investigation is in the 0.1 – 10 Hz range so we can rest assured.

The other problem is related to the 12V which is higher than the maximal analog input of Arduino. We can use several complex circuits to decrease the voltage without effect the load however a simple voltage divider could be utilized. However, we need the global resistance to avoid load effect but this is related also to the available resistors.

To read serial data I could use the Serial Plot from the Arduino IDE, however, I discovered a new software called Better Serial Plotter. It is an improved serial plotter with extended functionality like multiple plots, change name and colors, changing x vs y plots, autoscale, and saving the output to a file. Just classically prepare the code, as:

However, this is not balanced from the point of view of the resistor and leads to a resistor parallel (60 kOhm and the load) not optimal. The last components were selected as 20 kOhm and 200 μF and finally leads to the desired result. Of course, there could be better choices but this is what I was able to do with the available components.

Now we only need to integrate the circuit into the indicators cable and see the light blink as desired.

The equivalent circuit model for a parallel electrode impedance cytometer is analyzed together with Maxwell’s theory of homogenization of mixtures. It deals with both single shell and double shell cell modeling. The results show that Read more… 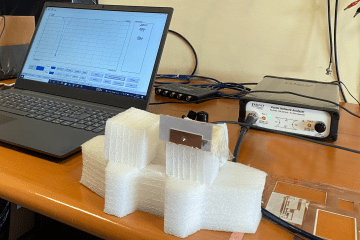 In this period I had the opportunity to gain different experiences in the design and construction of antennas. In particular, the latest experiences have focused on the study and design of patch antennas and antenna Read more…

I finished the “Deep Learning Onramp” introductory course held on the Matlab Training platform. The course provides the basis for dealing with Deep Learning in Matlab. Some theoretical points are addressed such as the structure Read more…