Parametric optimization analysis on a hip prosthesis stem subject to two load scenarios aimed at minimizing its mass while maintaining the stress state below the design limits.

To set up a parametric optimization study it is necessary to define the reference FEM analyzes.
By considering the two load scenarios is possible to set the two analyzes..
The CAD model of the prosthesis is divided into two different materials, titanium alloy Ti6Al4V for the stem and chromium steel for the head, assigning their respective mechanical properties.

In both studies, an interlocking constraint on the spherical head is considered and the forces are applied to the lower end (fig. 1). A denser mesh on the stem is used. A thickness of 1 mm is considered.

From the analyzes the stress is within the design limits (fig. 2), this makes it possible to proceed with an optimization study.

We then proceed to set up the parametric optimization study.
The first study was carried out with a less fine mesh that does not best represent the stem in thickness. However, it allows you to get a first general overview.

The study considers the thickness of the stem as variable and as constraints the stresses in the two simulations, trying to minimize the mass of the stem. From the results, in table 1 we can see how the optimal scenario is the one with a thickness of 0.9 mm. A total of 11 steps from 0.5mm to 1.5mm with 0.1mm pitch were performed.

Then, a second analysis is performed with this new mesh limiting itself to the worst (horizontal) load scenario. The new mesh starts from a limit for the side tetrahedral element of 0.3 mm (i.e. at least 3 rows in thickness) for the case of 0.9mm and analyzes scenarios of increasing thickness, ensuring minimum accuracy. From this second analysis it is evident that the thickness of 0.9 mm was actually out of the project specifications.

The direction of optimization is evident: adding material and therefore increasing the thickness tends to satisfy the constraint on stresses. Then, starting from a case at the limit of satisfaction, material is added with a finer step. Clearly the analysis stops around the limit conditions.

Then the second analysis faces 5 steps with thickness from 0.9 mm to 1.1 mm with a step of 0.05 mm. The results are shown in table 2. The optimal situation is obtained for the thickness of 1.05 mm.

Furthermore, it is evident that there is still room for improvement as there is a difference of ∼ 3 g between the scenarios and the tensions are not only still at the limit. Then a further analysis is carried out by pushing to the limit of tolerances (tenth of a gram) and approaching the limit of 500 MPa.
A final analysis is then carried out with a step of 0.01mm from 1 to 1.05 mm. The results in table 3.

The analyzes were then carried out again for the new discretization level, evaluating both load scenarios in the final thickness.
The result is therefore the optimal condition of 1.01 mm thickness with a mass of 266.84 g. We also emphasize that this value is accurate to the design limits, scenarios 3 and 4 of the last simulation are still valid alternatives, with a slight margin for tensions.

A frequency study was set up for the analysis of the vibration frequencies. A first case was analyzed considering the spherical head with an interlocking constraint. Then a free case was also analyzed, neglecting rigid motions (i.e. first 6 modes with frequency close to zero).

The resonance frequencies are far from the stimulations to which a prosthesis is subjected (eg cyclicality of a walk / run, a few Hz). 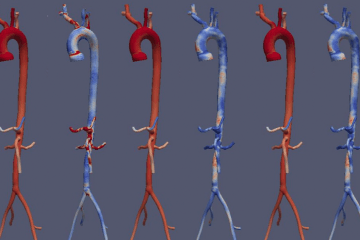 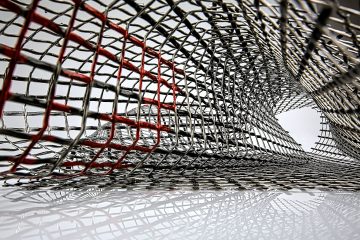 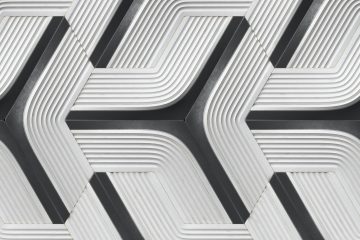 In the present analysis several simulation analysis were carried out to analyze the structural response of CF / PEEK laminated composites showing great potential for application in the biomedical field.Background, in a laminated composite the Read more…